Skip to main content
It looks like you're using Internet Explorer 11 or older. This website works best with modern browsers such as the latest versions of Chrome, Firefox, Safari, and Edge. If you continue with this browser, you may see unexpected results.

Setting the stage for suffrage

In the mid 1800's, women are becoming more interested in social causes such as abolition, child labor and safety laws, environmental protections (clean water, sewage management), and temperance among others. At the same time, it is still considered improper for women to be involved in politics or protest of any kind.

Lucretia Mott and Elizabeth Cady Stanton lead a group to develop the Declaration of Sentiments and Resolutions, a list of demands including the right to vote. It is presented at the Seneca Falls Convention (Seneca Falls, NY) which is considered the first US convention dedicated to women's rights.

Frederick Douglass, a prominent abolitionist, attends the convention and helps convince attendees to approve the the declaration. Sojourner Truth gives the now famous "Ain't I a Woman" speech at the first National Women's Suffrage Convention. The link she makes between oppressions of race and sex stirs controversy among white suffragists. The Civil War puts the women's rights movement on hold. Many suffragists believe that their part in the war will be repaid with the vote.

The fifteenth amendment, passed in 1869, does not include sex, against which the vote could be prohibited. This causes a rift within the suffrage movement and is only the beginning of a complex relationship between race and sex as it relates to women's suffrage.

The National Women's Suffrage Association, which protested the omission of women from the Reconstruction amendments, was largely led by Elizabeth Cady Stanton and Susan B. Anthony. They focused on the goal of a federal amendment to give all women the vote. 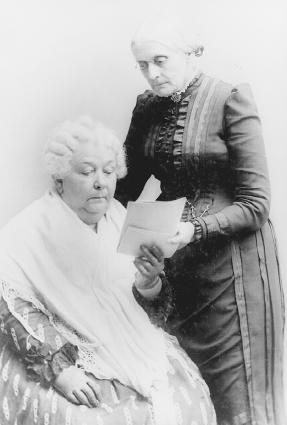